You can manage multiple versions of any APIs you create in Postman. You can then associate mocks, monitors, and documentation to specific versions of APIs.

Each API in Postman has one or more versions, and versions have multiple releases. Each version also has a status.

You can create any number of versions in parallel. For example, you can create a new 2.0 version of an API that introduces new breaking changes and work on it internally, but keep adding changes to the 1.0 version that is currently public.

A typical workflow for API-first development:

You can connect a GitHub, Bitbucket, GitLab, GitLab Self-Managed, or Azure DevOps repo to your API, and sync your API specifications and associated collections with the repo. You can continuously make changes synced between Postman and a develop branch in Git.

When it's time to release, you can merge the develop branch to the main branch in Git, which holds the released version of the API. You can then create a Git release, and map this release tag to your release in Postman.

A typical workflow for API-first development with an external Git repo:

You can connect an API to your remote Git-based repository, at the API level. This enables you to continuously synchronize changes between the repository and Postman. Versions and release tags are then synchronized between Postman and your Git repo.

The user account used for authentication requires full access to repositories. You may want to create a service account with limited permissions specifically for this integration.

You can only connect one Postman API to one remote repo. Multiple APIs require multiple repos. Multiple versions of an API can link to the same repo/branch combination, as long as development only happens on one branch. If you link a repo/branch to a new version, then all older integrations on that branch become locked. For inactive integrations, no pulls/pushes or new tag-links can happen, but the linked tags will remain.

To connect a repository:

When you are connected to an external Git repo, the repo dropdown list displays your current develop branch and indicates if your API changes in Postman are ahead of or behind the files in your external repo. It shows links to the connected branch and repo, and a date when changes were last pulled to Postman or pushed to the Git repo. It also contains commands to pull, commit and push, switch branches, and delete the integration. 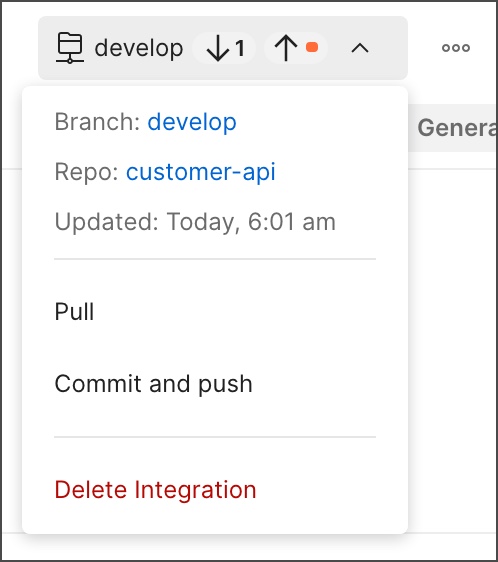 If you have a local change that conflicts with the remote copy, you will be shown a link to the latest Git commit, and the conflicting files. 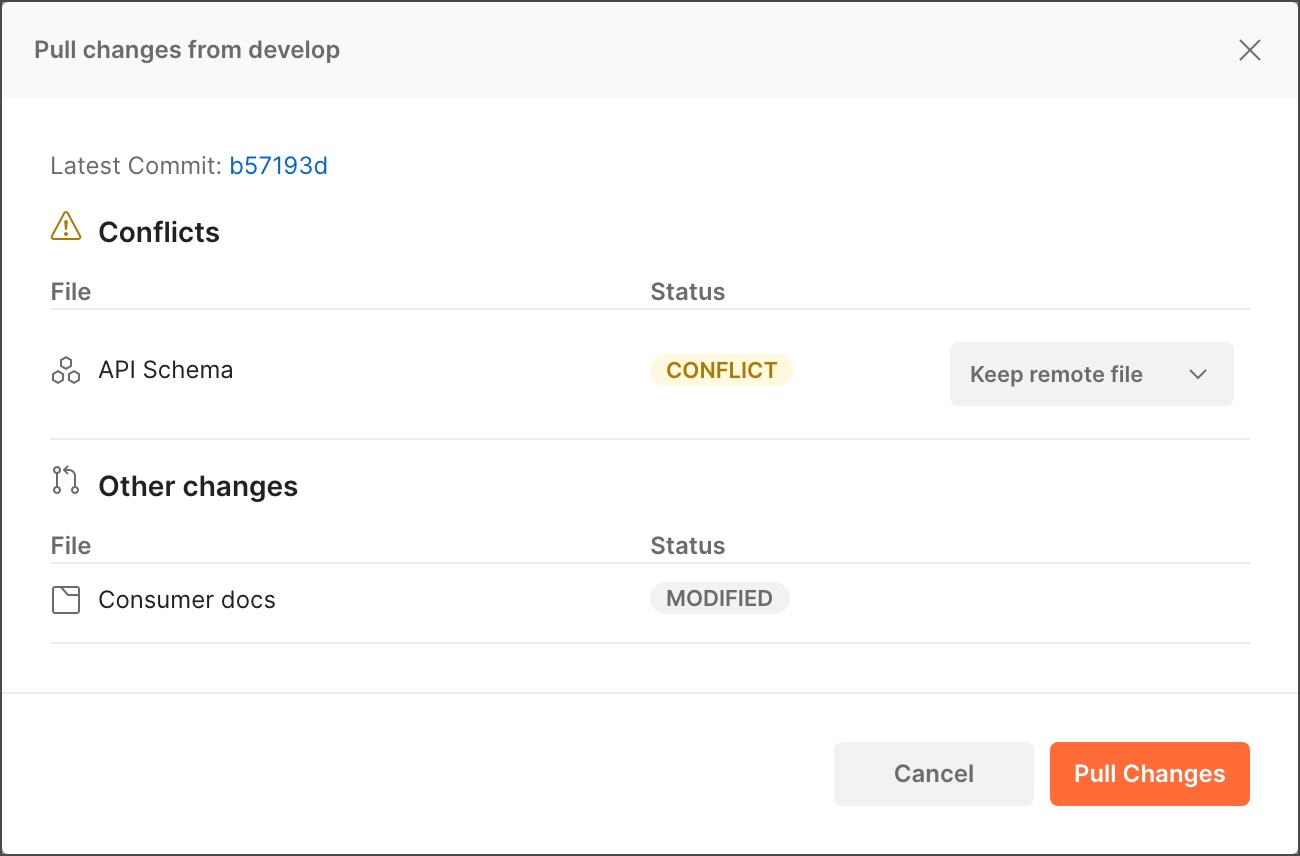 To resolve the conflict, next to each file, select either Keep remote file or Keep local file, then click Pull Changes.

If there have been changes on the remote repo, you will be asked to pull changes first.

To switch to a different branch, select Switch Branch the repo dropdown list, then choose a branch from the list. Note that the Switch Branch list is only available if your repo has more than one branch, in addition to the main branch.

When you are not in the configured develop branch, you can only edit the API schema and collections. Commit and push your changes to the feature branch, then in your Git repo, you can make a pull request, review changes, and merge back to your develop branch.

You can remove a connection to a Git repo at any time. You may want to do this if you are changing accounts or providers, or need to use a different development branch.

On the repo dropdown list, select Delete Integration. Note that this only removes the connection to Git; it does not change any files or branches.

When you create a new API in Postman, it also creates the initial version you entered during the API creation. You can create new versions from scratch or based on an existing version. Each API version has its own API version page, which you can find on the API Overview page or in the left sidebar.

To create a new version of an API:

You can rename, edit, or delete an API version using the View more actions (

) menu in the left sidebar. Editing an API enables you to change the name, status, and visibility at once.

When you delete an API version, the collections, monitors, mocks, and environments linked to it will not be deleted or removed.

A release is a periodic incremental change to a version of an API. You regularly create a release to put out changes that have been made to the API. Releases can have semantic version names (3.2.0-beta) or can be named dynamically (2021-12-25, Q4 Security Update).

When you are connected to an external Git repo, releases can be mapped to the Git release tags.

Releases are shown on the API version page, on the Overview tab. Hover over a release and select View Release to open that release's page.

Each release page shows a read-only view of the schema, documentation, and tests associated with that release. You can't make changes to a released API; if you have more changes, you can create another release.

To create a release:

You can also edit a release name in the Changelog. Next to the release, select

An API status is a text tag which you can change to indicate the current stage of the API version within your development cycle. For example, you can select a status such as "In Design," "Security Review," or "In Production." You can set different statuses for each version of an API.

A status doesn't affect visibility, permissions, or availability of an API. It's simply a way to tell others on your team the current state of the API. Statuses are not automatically changed by any actions or state change in your files. You can change the status at any time.

Statuses are displayed in the upper left of the API tab. To set a new status, choose one from the dropdown list.